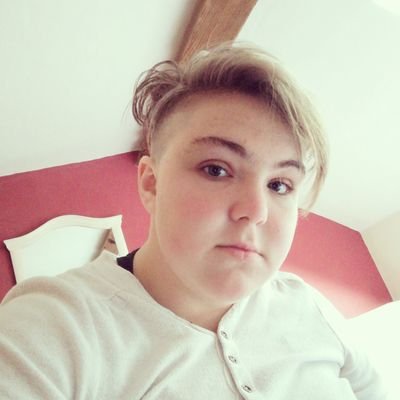 She was the first Earper with a billboard on Times Square, setting the trend and getting our show noticed, meet Lauren Jones (@Lorenzos_world).

Who is Lauren Jones?

Hi, I’m Lauren, thank you to Petra for giving me the opportunity to write for the World of Earpers blog. So, yeah I live in North Wales in the United Kingdom on a sheep farm in the hills with my parents and just recently graduated from university studying music production. I’m currently unemployed at the moment so I help my parents out but I’m building a recording studio in one of the out buildings on the farm. My dissertation was based on designing the studio which was really cool and I’m hoping to be able to go freelance, recording audio and making my own music.

It’s funny really, I found Wynonna Earp totally by accident after working on the farm all day. I tend to fall asleep on the sofa around 10 or 11 at night. Just happened to wake up to it and I was interested ha-ha. Instantly reminded me of Buffy, which my two older sisters brainwashed me with when I was a child, so I was hooked. I believe it was 2×06 and I researched to find season 1 was being replayed on the then British channel 5Spike website and caught up with it so I could watch the rest of season 2 the next time it was on.

I think what really made the show more appealing to me was the character of Waverly Earp. At the time I was watching the show I was a barmaid in my local village pub, around the same age and was starting to question myself on a few things such as sexuality and where I belonged in the world. I was looking to go to university that year (September 2017) to broaden my horizons. It’s quite scary actually even the Earp sister age gaps are the same as mine and my sisters so it’s almost like watching myself!

Back when The Fight started you were the first to buy a billboard on Times Square in New York. Such a brilliant idea! How did you come up with that?

Ahhh the billboards, I don’t really credit myself with the idea, in fact it wouldn’t have happened if it wasn’t for Jill, Maureen and the rest of the Orginal Today Show crew (apologies if I haven’t mentioned others, I’m not very good with names!). I saw them on Twitter and I was in my university accommodation, bored with an assignment, saw a few tweets saying something about bigger signs ect and I just looked up billboards. First one to come up was Big Sign Message  and that’s what happened, so all credit goes to those Earpers ! Plus a massive thank you to everyone who went down to Times Square for a random British person and everyone who supported it , it means a lot!

It must have been amazing, seeing the billboards take off like that.

Haha yes definitely. To be honest I was amazed at the initial reaction but then I remembered how ride or die the fandom is and I was just happy people had decided to go with it and throw everything at it. I was a bit starstruck when the cast and crew started getting involved and massive credit to the new York billboard crew, those guys are mental! Going out in all weathers and even had a plan of times and what billboards to see.

I think this is the right time to also point out it just wasn’t this crazy idea that helped the show either. I mean it was great publicity and it put out the story but I just wanted to highlight the amazing work going on with people posting on social media, the phone calls and emails and some amazing creative work such as posters, Emy Taliana Music she was doing songs every day of the fight so there was a lot going on! I saw some posts of Earpers feeling like they weren’t doing enough or felt like they had not  contributed to it and I just want to let them know that even the fact that they are an Earper and watching the show is just a bigger contribution than anything else .

What did the fight for Wynonna mean to you?

Personally, the fight for me was exactly what Emily first tweeted about, family. I played rugby at university and it’s a family protecting a try line, so I took that concept on to the fight for Wynonna. I think at times the social media I was seeing embodied emotions that are seen on the rugby field. It’s a gentlemen’s/gentlewomen’s sport, you have to have aggression but must be respectful to the Ref and your opposition. It’s literally the sporting version of polite no chill! In fact the show has become our unofficial mascot for the rugby team!

There was a little bit of selfishness to the fight for myself. I have Asperger’s and I like routine. The summer before I went to university and the summer after my 1st year I had something to keep me sane on a Friday / Tuesday night, so in the back of my mind I was feeling a little unrested about having it taken away !

All in all even though the fight should have never happened in the first place, I think the show is all better for it. The passion and heart from the cast , crew and everyone involved is just inspiring and from what we are all seeing on social media series 4 is going to be fire!

I see on your Twitter profile that you’d like to become a music composer for film and tv so you must be paying a lot of attention to the music in Wynonna Earp. What do you think of the music in the show?

Ah yes, music has always been a big part of my life. I started drumming at age 11 and studied Latin and Jazz drums before I went to university. I studied music production at university but had optional modules where we could choose sound for film. I did this for 2nd year and 3rd year. We looked at foley, ADR, and obviously the music and that’s really stuck with me, either it be composing or being a music supervisor. I was lucky enough to take a composing / supervisor role in a student film in December 2019 and I seriously enjoyed it.

The music on Wynonna Earp is on point. One episode that comes to mind is 2×11. Andrea Higgins just absolutely smashed that episode. Zayde Wolf, whose songs feature a lot in that episode, became one of my pre rugby playlists. In university we learnt about trigger tracks that motivate people and his album was definitely a motivator pregame for me.  That whole episode was just a gold mine of music, but I think the whole show is. The composers Robert Carlie and Peter Chapman have been a big inspiration for me to follow in the world of music for tv and film. Their pieces mixed in with the incredible lighting, acting and truly amazing writing just makes those scenes more emotional and rawer. Music tends to get overlooked along with sound, but Wynonna Earp has it bang on! A show that names episodes after country songs and has a brilliant score throughout, what more could you ask for?

Another thing to touch up on would be the onset and postproduction sound crews . The amount of work that goes in is insane. I had the opportunity for an assignment to pick any footage of my choice (obviously Wynonna) and we had to replace all the audio  (ADR, Foley and Dialogue) with our own reinvention of it. It took ages but was a ton of fun, I spent over 30 minutes rolling around in a foley pit full of leaves at one point, it’s just crazy.

You’ve been to Earp Expo. That was your first Wynonna Earp con? Have you been to other cons? What was it like, meeting the cast, meeting the Earpers? Any special memories?

Earp Expo was my first convention of any kind really and what a place to go! New Orleans is something special. I was lucky enough to get there a week before the convention, so I stayed in a hostel for a week, just exploring the French quarter. The convention itself was a very humbling experience. I had to a take a few breaks and just process a lot of things. This was a few weeks before we had the go ahead that season 4 was definitely back on but a lot of people said that they felt like the convention was different, that something was more upbeat amongst the cast (if I’m allowed to say that). I honestly myself didn’t have clue as I hadn’t really interacted with the cast up until this point. The cast are absolutely lovely and I’m lucky to have met them. How open,  humble and down to earth they are just really sums the show up. I mean Kat was in a sports bar watching the Raptors championship winning game, sitting with Earpers,  you don’t hear a lot of that going on in other fandoms.

Special memories that weekend is mostly meeting fellow Earpers. I roomed with two Earpers I hadn’t met before who happily showed me around the convention. It was an incredible experience. I got to meet the New York billboard crew and was asked to be part of their group photo with the cast, which was awesome. One thing that stays in my mind and helped me over the weekend was from the opening panel. Michael talked about taking time for yourself during the convention and to take time to reflect as it’s easy to get overwhelmed with just like the amount of people and information that you are taking in. It helped quite a lot with my autism as I get easily tired and emotionally drained socializing.

What does the future hold for you, Wynonna Earp wise? Any planned cons?

As I mentioned before, I’m hopefully going to finish my studio. There is so many avenues I can go down once it’s up and running. My twitter handle, lorenzos_world, is my artist name and I’ve recently made a future bass track with a friend, which is due to be released soon. And a band from the city where I went to university, recently released a charity single for the NHS which I helped produce .

There’s a lot of exciting things going on at home too. My dad’s a massive American car enthusiast so we are doing a lot of projects. He had a Ford F250 which I was pleading for him to paint blue and white. I know the Earp truck is a F150 but we were so close to having a replica. We also train horses with natural horsemanship and western riding so there’s a lot going on!

Wynonna Earp wise I’m just going to carry on watching the show. I know it’s been difficult for international Earpers to get our hands on some of the seasons and I think that’s a great shame at the moment I’m just being grateful for season 4 actually happening and I’m sure someone somewhere will pick it up and if not we know how to get our voices heard. Con wise I was supposed to be going to Earp Expo again but as we all know we are facing a worldwide pandemic at the moment; I have transferred my ticket to 2021 and hopefully we can all meet up safely and Earp once again.