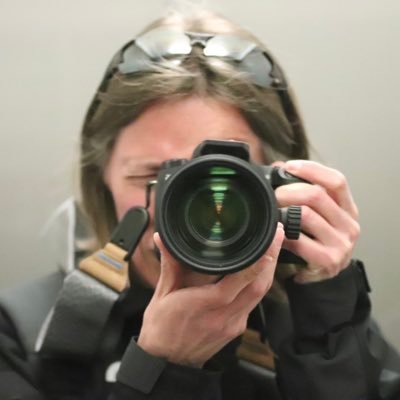 This Earper spends most of her time at conventions behind her camera, taking photos of the Wynonna Earp cast, meet Petra (@dutchstarbuck).

A vampire that was last seen in Purgatory. Oh, you mean me? I’m a 46-year-old Earper from the Netherlands. Almost 20 years ago, I joined the Royal Netherlands Army as a Geospatial Intelligence Officer. After serving for 12 years and 2 deployments (Iraq and Afghanistan), I became a civilian. I started working for the Netherlands Ministry of Defence, where I currently work as a policy officer.

In my spare time, I Earp, which in these COVID-19 times mainly means working on my convention photos of the beautiful cast of Wynonna Earp. Hopefully soon I will be able to hang out with my fellow Dutch and Belgian Earpers again, doing fun stuff like going to football (soccer) games and the movies together again. I also like to play board games, read fanfic, and do CrossFit.

I remember reading online about an upcoming show with a kickass woman in the lead. So, when the first ep aired, I <part of the sentence redacted because of legal issues, something about torrenting>. I watched the first ep and thought it was okay.

But then, I watched the second episode, and this Deputy started flirting with Waverly. I was like, ‘Are they really going there?’ Then this Deputy turned out to be a character I could identify with, for pretty much the first time in my life. And so it began….

We’ve all seen your convention photos online. How did that come to be?

I’ve always liked photography. I photographed vacations and stuff, but I never did anything with it. When I started going to conventions again in 2016, I took my DSLR camera with me. I noticed that after the cons, there weren’t many photos of them online. So, I posted some of mine for others to enjoy.

But the hobby really took off during/after EarperConUK 2017. I found out that I absolutely love taking photos of this cast. They are so open with their emotions and clearly have so much love for their fans. But, most importantly, everybody seemed to love my photos when I posted them online. I learned that other fans, who were unable to attend the con themselves, could enjoy the con through my photos.

What does it take to take good convention photos? What is your process like?

Usually, the lighting inside convention halls is terrible. That is why it is essential to have a good, fast lens that lets in a lot of light. My first (and best) upgrade after ECUK17 was buying a 70-200mm 2.8 lens. Only later, I started upgrading my camera. My current camera can handle higher ISO values better.

My process differs a bit, depending on the role I have at a convention. If I’m an attendee, I will only bring 1 camera and 1 lens (70-200mm), since I will be only shooting the panels. That also requires purchasing the best tickets and standing in line early to get the best possible seat to take photos from.

If I’m lucky enough to be accepted as volunteer photographer at a con, I will bring 2 cameras and multiple lenses. I need those for BTS photography, such as taking (group) photos at Meet & Greets, meals, autograph sessions, and photo ops.

I shoot in RAW. That means I have to do some processing before I can post the photos. During the con, I download photos from my camera to my phone. That way, I can quickly process them and at least post some photos right away. During breaks, I copy the photos to my laptop as a backup. In the evening and when traveling home, I will start going through all the photos on my laptop. I mark the ones that can be deleted. After a con, it will take some days to process all the photos. I correct the white balance, crop them, tweak them, and so on. If I do con photography as a volunteer, I then upload the photos to a folder so that the convention organizers can use them for their website and other communications.

I love them both. Panels are so much fun to shoot with this cast. They’re so comfortable with each other and the fans; they are very open with their emotions. There are tears, there is laughter, there are hugs, so many candid moments. What more do you want as a photographer and as a fan? They are excellent ‘models’ that way.

And BTS is so much fun because you get to see fans interacting with their idols, the mutual admiration going on there. Everybody is having a great time and celebrating everything Earp. My first time doing M&G group photos was nerve-wracking to me because I know how valuable that group photo is to the fans that just had that M&G. Fortunately, the fans liked the photos.

You don’t do video?

No, video isn’t my thing. Besides, thus far, I have mostly gone to cons as an attendee. While taking photos is allowed at cons, recording video is not.

So, you are the ‘official photographer for Earpers everywhere’?

Yeah, that was the first thing Tim Rozon said to me during my HomeCon 1on1 with him, after him telling me that I was famous. I was flabbergasted as you can imagine; I hadn’t expected that. I know Earpers love my photos, but it’s something else hearing it from the cast.

Some of them have used and liked my photos on social media. That is such an honor to me, a hobby photographer. It’s always fun starting up your social media app and seeing likes by fans and cast alike.

I also never forget the first time Kat Barrell specifically thanked me for my photos in an Instagram post (after Love Fan Fest 2019). I still can’t wrap my head around the idea that someone whom I’m a fan of loves my photos.

What is your fondest Wynonna Earp convention memory?

I have so many good memories. Wynonna Earp conventions are truly my happy place, and I miss them dearly this year. I will never forget the first WayHaught panel at ECUK17. The chemistry we saw on television was also visible on that panel; it was magic. It was so much fun seeing Kat and Dom together.

Another one is my first time doing BTS photography for a con. It was at EH Con Canada 2018. It wasn’t planned that way, but I suddenly found myself as one of their photographers. I had such a great time at that con. Running around and taking photos everywhere, documenting the convention.

And at Earp-a-palooza 2019, I did a photo op with Dom and Kat where we turned the tables, having them take photos of me. I gave them my cameras, which were switched off with the lens cover still on them, but in the end, Dom and Kat really wanted to take a photo of me. So I now have photos of me taken by Kat and Dom.

Any tips for fans taking photos at conventions?

Turn off the autofocus beep! Your fellow fans will thank you for it.

Also, learn how to control the autofocus on your camera. That way, you decide where the camera focuses instead of the camera figuring out itself and focusing on that darn microphone or that ever-present water bottle.

What does the future hold for you, Wynonna Earp-wise?

Hopefully, many more cons to photograph, be it as an attendee or (preferably) as a volunteer.