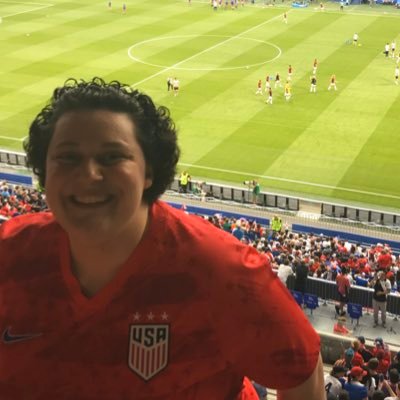 Earpers have probably seen her at conventions, running around as a volunteer. Security, handler, she’s done it all. She makes great art and she loves giveaways. Meet Sarah, aka @SpartyOn07.

This is always one of the hardest questions for me to answer because I’m not even sure I know myself. I’m a Midwest, small town girl who currently lives on the East Coast of the US. As hard as it is being so far from family, I can say that I’m lucky enough to work for a company that I never would have imagined working for and that’s the sports network, ESPN. I’ve always loved television and movies and knew it was what I wanted to go into from a very early age.

More so, I am a daughter, a sister, a friend, a fangirl and most importantly, I’m a proud aunt to the cutest little girl in the world.

It actually comes from my college days. I went to Michigan State University and the mascot’s name is Sparty. While I was there, the saying “Party On” was popular so people at the school played off of it saying “Sparty On”. Not to age myself but the 07 at the end is the year I graduated from there. Hence, SpartyOn07 was born.

You’re a familiar face at cons, both as attendee and volunteer, what draws you to cons? Which cons have you done? Best con experience?

My first ever con was one back in Michigan where I got to meet Lena Headey and Katrina Law. They are two of the nicest people you could ever meet and from that moment I was hooked on cons.

I’ve been to SDCC, NYCC, Fan Expo Canada, ClexaCon (x3), EarperConUK, Earp Expo, EH Con (x2) and Love Fan Fest. I love volunteering at them too. I’m the type of person that needs to stay busy or I tend to get stuck in my own head and thoughts so I’ve found that volunteering really helps. Plus, I love interacting with attendees and helping to be part of making it a great con experience.

I don’t think I really have one best con experience that sticks out. I have a bunch of great ones but I’m kind of private when it comes to sharing any con stories or pictures. To me, there’s something special about meeting the people you admire and having that moment with them, that I keep guarded and close to my heart. If I had to choose the best con experience though, it would be at the cons where I’ve met some of my very best friends.

How did you get into Wynonna Earp?

I started watching Wynonna Earp around episode 6 of the first season after seeing the WayHaught meeting clip on Tumblr. I hadn’t heard of the show until that then. I didn’t actually join the fandom until much later due to previous bad fandom experiences.

What are you hoping to see in season 4?

Honestly, I don’t think I really have any hopes for the new season. I’m just happy that we have the new season and I’m here for the ride.

We also know you from your Fight for Wynonna artwork and the movie posters you made, how did these come to be? What was your inspiration? What made you start doing these? What tools do you use?

I’m not even sure how they came to be. I just remember us fighting for season four and Emily saying “Don’t fuck with my family” and for some reason my brain thought it would be cool to put that on the iconic Rosie the Riveter.

A lot of the movie poster ones I’ve made have either come from movies I love or movies that members of the cast have mentioned. There are a couple that I’ve made that I’m pretty proud of especially since I had to manipulate a male body to a female one which is harder than you would think when the picture has a pre-existing background image. I can tell you that manipulating Jason Momoa’s Aquaman body into a Nicole Haught Aquawoman body was an experience.

Feel free to check out my art on Instagram at @HolyHaughtDamn. (Yes, I just promoted myself, don’t judge me.) As much as I wish I could draw, unfortunately, I can’t so I have to settle with teaching myself Photoshop to manipulate pictures. I actually got into Photoshopping and creating these as a way to calm myself when my anxiety and depression start to get bad. It’s kind of like a therapy for me.

You’ve also done some giveaways, thank you for that. Anything planned for the future?

I’ve just finished up a couple and I’m sure I’ll have more in the future. I’m working on a pretty big cross stitch pattern right now for a fellow Earper but once it’s finished I’m hoping to make more Earper stitches to giveaway.

I’ve noticed a bit of Earpers who haven’t felt included and have wanted to leave the fandom, myself included, so I wanted to do something to help make them feel noticed and belong. There seems to be an imbalance in the fandom when it comes to fans (I’ve been around long enough to experience and witness both the best and the worst) and I want to let people know that no matter what, they’re an Earper and they belong and are seen. I know it’s not much but I do what I can to help make others feel included and to hopefully, bring some joy. In the end, I hope I’ve succeeded with that.

What does the future hold for you, Wynonna Earp wise? More artwork? Planned cons?

I’m not the type of person who looks far ahead into the future so I can’t say. I’m going to keep enjoying season four and hope for the season five that was mentioned.

As for artwork, I’m hoping so! It’s more just whenever an idea randomly comes to me and when I can find motivation. If anyone has any ideas, I’m all for hearing about them.

As for cons, sadly, I’ve decided to cut way back on them next year for multiple reasons but I will be attending a couple. Quite a bit has changed for me in the last year and a half with not feeling as comfortable attending cons and learning that I have a pretty high standard for them and as much as I would love to go to more, I can’t and won’t sacrifice my morals. However, as far as Wynonna Earp cons go, if anyone is going to Earp Fest or EH Con, I’ll see you there and please come say hi.

Working in sports or working on Wynonna Earp?

I would say, hands down, working on Wynonna Earp.

It’s always been a dream of mine to work on a scripted tv show. The only problem with working production in tv is that the jobs aren’t guaranteed and a lot of it is based on who you know and connections. Depending on how well the show goes, you could either have a job for 20 years or only six episodes.

After working just shy of 10 years in local news doing everything production from cameras, teleprompter, audio, graphics, technical directing and directing, it was more than time to move on and I was too scared to take a chance moving to LA and not finding anything so I went the safer route. I’m glad I did though because my chance paid off and maybe one day it will lead to connections and open doors to help me reach that dream of working on a scripted tv show. As much as I love working in sports, there’s just no comparison to Wynonna Earp.