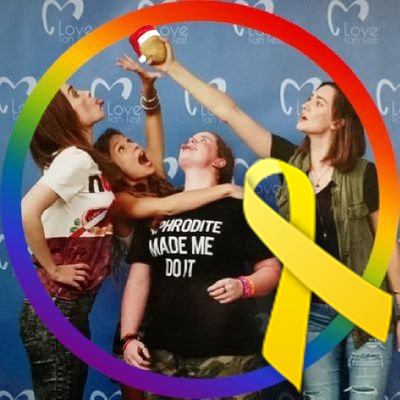 Earpers may have seen her at cons, but they have most definitely seen her Wynonna Earp artwork on Twitter or Instagram. Let’s meet this Dutch Earper living in Belgium, Astrid aka @AstridvdHoff (Twitter) or @astrid.vandenhoff.drawings & @doodlethegays (Instagram).

Hi guys, let me introduce myself. I’m Astrid, 29 years old. I was born in the Netherlands, but moved to Belgium when I was 9. Well… actually, my parents wanted to move, and as a nine year old I didn’t have a say in it. But I am happy I can call myself a Dutch/Belgian Earper.

I share my life with my chestnut (ginger) horse; Flaxmans Thelma (Egyptian, 22 years old) and a semi ginger cat (Miyu, adopted last year, 10 years old). So you can kinda say I’ve started my own ginger family.

My hobbies are drawing, horseback riding, and roller derby (currently on a break thanks to an injury from a few years ago, but I am planning to start again).

I discovered it by accident. I was looking for a show, and I saw a trailer online somewhere on YouTube (I kinda like Syfy shows, and if I recall correctly, it was because I watched Z Nation 😊). The second episode had aired in the US, a few days before I started watching.

The second season started airing while I was on a round trip in the US. So I was able to watch it live, and without delays. The first thing I would do in a new hotel, was checking if they had Syfy channel.

That’s one thing that sucks if you live outside the USA. It’s almost impossible to watch it live, and you have to create American or Canadian accounts to watch it on iTunes/Amazon/… But hey, Wynonna Earp is worth it!

How did you get started with your artwork? You also do pet drawings right?

I started drawing at a very young age (like everyone else). Years of practice later I started getting better and better at it. I am self-taught, so I never had any lessons. When I was 10 (I think?) my parents gave me the option: drawing lessons, or music (clarinet) lessons. And I chose the second option, thinking I could learn drawing all by myself.

When I was 16-17 I was going through a really tough time, and I stopped drawing completely. It took me a few years to pick it up again, but I found my happiness in drawing again. I learned myself how to draw with different mediums (color, graphite, pastel), and I discovered digital drawing. As I improved, people started asking me for commissions of their pets, and later on also of people.

So now it is a hobby with a few benefits (it pays for my equipment and stuff).

Well… I still prefer drawing animals, but I really enjoy drawing people now too. But to pick a favorite character? Hmm.. I think I have to go for Nicole? She has got so many facial expressions, and of course the bright red hair. I don’t like drawing hair, but I make an exception for gingers.

But to be honest, I enjoy drawing woman’s faces in general. Everyone has their own beautiful features that are really fun to put in a drawing. Because it makes them “them”.

You’re a Dutch Earper living in Belgium. What is it like, being an Earper in the Low Countries?

That just means I have the best of both worlds 😊. I live in Belgium, work in the Netherlands, and have friends all over both countries, a lot of them are Earpers.

We (the Flemish part) speak Dutch as well, so there’s no language barrier when we all meet up. And since both countries aren’t really big, I can drive to the other side of the country within 3 hours. So a meetup is never too far away.

You have also done a lot of conventions. Which ones did you go to, what did you like about them? What was it like meeting the cast? Any special memories?

I’ve been to quite a few conventions, yes. All three editions of EarperConUK, the two previous editions of Love Fan Fest (and the upcoming one), OSAB and FTLOF in Paris, ClexaCon UK, and a few conventions throughout Belgium, the Netherlands, and England (FACTS, Brussel Comic Con).

Of course, the first time it’s all about meeting the cast. But a lot of friendships formed during them, so after a while it’s more like meeting your family again. Meeting the cast is a lot of fun, but just being there with friends is the best in my opinion.

Also, all the new people you meet! I used to be a real introvert, but that changed for the better, thanks to the people I’ve met.

What does the future hold for you, Wynonna Earp wise? More artwork? Planned cons?

More artwork? Of course.  Unless you guys are bored of seeing them 😊 (if so, let me know 😉). Currently I am working on a collection, with all of them in the same theme (see image below).

As for the conventions, thanks to Covid, this will be a year without conventions. Love Fan Fest and Fanfusion are both postponed till next year, so you’ll see me there if all goes well. And sadly, Peacemaker in Germany is canceled. I was really looking forward to that one.

Maybe I’ll go to another one instead, but that’s not set in stone yet.