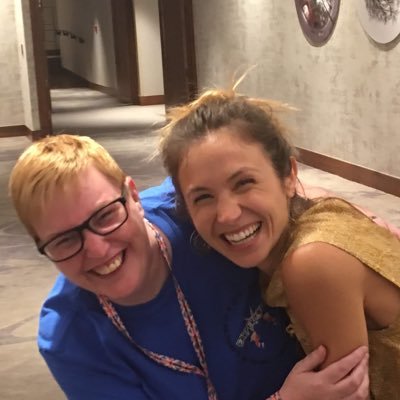 This Earper does it all, organizing conventions, making videos and rallying her fellow fans to get seasons 3 and 4 to all the Earpers all over the globe, meet Angela aka @Gloves12!

Hi everyone!  I’m from Glasgow in Bonnie Scotland. I am married and have 2 cats. One a ragdoll called Jasmine and a maine coon cross called Jasper!

All my working life I worked in household insurance claims mainly as a Team Leader and an auditor. I have always enjoyed working with the public and assisting them.

One of my hobbies is that I love strategic board games and pre covid we would meet once a week to play with friends.  I am also part of a quiz team who helps support our local hospice.

A friend recommended Wynonna to me not long after it started airing. I started to watch episode one, thought it was a horror type show and switched it off.  My friend insisted I watched it and I gave it another go a few weeks later. The rest they say is history I was hooked.

You were one of the organizers of THE OG Earp con, EarperConUK, what was that experience like?

To be honest organizing a convention is a roller coaster of emotions. It is stressful, hard work and time consuming.  On the other hand, it is also very rewarding, an achievement and lots of fun. More so when it is for a TV show you love and are so passionate about and meeting the cast. I made so many friends and that makes me feel very lucky. I am proud to be have been a part of the first ever Wynonna Earp Convention and it is something that will stay with me forever.

For me the biggest part was seeing attendees happy and to be able to give them happy memories of meeting the cast and their friends at the event.

You’re now also working on another convention, FanFusionUK, what can you tell us about that con?

FanFusionUK is a little bit different for the UK in that it is a hotel-based weekend convention with all female guests. The idea behind it is to celebrate women in tv and film.

We have announced a few guests so far from the 100, Xena and Gentleman Jack.

From Wynonna Earp we do have Zoie Palmer and Dani Kind attending who both play brilliant characters in the show.

It is going to be a lot of fun and we have more guests still to be announced!

Earpers also know you from your videos, with the fun Wynonna Earp silent movies being your latest project. How did that get started? Do you have any formal training on video editing? What is your process like?

I got into creating fan videos after I hurt my back and developed a condition called Fibromyalgia. I needed a hobby to help me cope. I had always been creative and I loved watching fan videos.

It seemed like the obvious choice to go down that route. I bought myself some editing software and taught myself how to make videos. To date I am still learning.

When creating the videos, it’s like a spark goes off in your head and you just automatically know what you want to make. Wynonna Earp is ideal in every way for this as I love the show so much and the stories you tell in the videos just flow naturally. Everyone knows all the emotions Wynonna Earp produces along with great stories and characters.  It’s the perfect combination.

The music is a major part of the video for me and sometimes it can take weeks to find the right song or music score. It is important to me when creating videos that the clips match the words in the song and helps the video flow and tell the story.

I also enjoy doing something different and I am a big fan of film trailers and how they can invoke so much emotion, fear or laughter in literally 2 mins. So, it seemed only right that I create imitation film trailers based on Wynonna Earp/WayHaught also.

My silent film movies are just fun to do and growing up watching them just plants the seed for ideas to make my own. Its an outlet to take something modern and give it a nostalgic twist and make people laugh.

International Earpers are having a hard time, with a lot of fans still waiting for seasons 3 and 4 to air in their country. To coordinate efforts, you started @EarpTheWorld. What is the idea behind that?

Wynonna Earp has such a huge passionate fan base around the world and each day on Twitter I would see more and more Earpers upset that they could not see the show and in particular Season 4.  I wanted to help our show reach every Earper no matter where they were. I then came up with the idea to Earp The World, a campaign for the show to air in more countries.  @LesFlicks teamed up with me to provide their support and we brought on board a small team of Earpers. We are in the process of gathering broadcaster information for various countries at the moment and we have ideas and plans to roll out soon. So, keep an eye on our account for news.

What does the future hold for you, Wynonna Earp wise? More videos? Planned cons (apart from FanFusion)?

Wynonna Earp wise…. certainly, more videos to come and of course busy with Earp The World.

I also am one of the admins for Wynonna Earp Fans and Tales of the Black Badge fans Facebook page, so plenty to keep me busy.

Convention wise nothing Wynonna Earp related planned (sad face). I hate flying which doesn’t help and due to my condition, I am also restricted when it comes to travelling abroad for cons. I have many other UK cons I am attending though to tide me over.